Recently I've been trying to learn a bit of Python and decided to build a project for fun.
This project has a simple objective: To control a virtual object using a set of potentiometers.

By Connecting a set of potentiometers to an Arduino, this gave me the ability to manipulate two variables. I decided to manipulate the x-axis and the y-axis of a virtual box in Python. 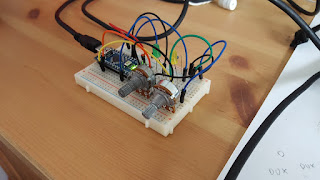 The Arduino's circuit is simple. It has 2 potentiometers and 2 LEDS which will have different light intensities based on how much the potentiometer is being turned.

Here goes my attempt at explaining how the code works. *takes a deep breath*

Let's take a look at the Arduino's code:
The parts with the //(comment) is the explanation

//Varying light intesities based on the degree of movement of the x and y axis. (based on the potentiometer)


Now let's take a look at the Python side of the program: (# are for comments)

#Declaring an object to set up the shape. In my case, I'm using a box, the values in the brackets are
the parameters for the box. The 'pos' value is what we need to change dynamically, (x,y,z) axis. We don't have to bother with the Z axis in this case.

y = 0     #Declaring the variable used to change the Y-axis,  not sure why only y is needed, but the
code does not work without this.


Don't copy and paste the program from here. It might get messy. Instead, download it from my Google Drive folder.